Trips you can make from Athens, Greece

Athens is one of the oldest cities in the world; the city of Pericles and Socrates; the city where Democracy was born; the city where arts and letters blossomed. In modern history, Athens is an extremely popular international destination for personal, as well as for professional reasons. The landmark of the city is the sacred rock of Acropolis with the astonishing Parthenon, whose presence has been prevailing for thousands of years.

The size and the plethora of points of interests in Athens make the use of a car essential. For your car rental needs in Athens, trust Clio Rent a Car. We provide you with the suitable car for your needs, making your travelling during Greece a wonderful experience. From Athens, you can easily plan all-day excursions, since within 150 kilometers you will find unique monuments, attractions and other must see places. 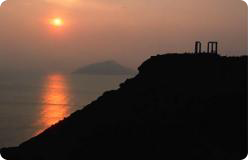 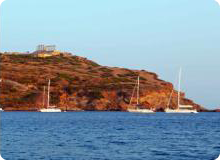 A great afternoon trip from Athens, this is one of those spots that is as much a favorite with the locals as it is with the tourists. It's a favorite sunset-viewing spot for everyone, and will give you a classically Greek moment against the ruined monument along with a terrific sea view. While it is possible to visit Sounion by public bus from Athens, most visitors prefer to drive or to take an organized tour. Recently, Sounio has become one of Attica's most sought out areas, with gold, sandy beaches, crystal clear waters and hotels, night clubs, classy restaurants and traditional Greek tavernas.

The prefecture's capital is the region's prominent administrative, commercial, financial and cultural centre. The city centre has wide roads, parks, squares and a picturesque port with fishing boats. Beautiful pedestrian walkways entice the visitors for a stroll, a coffee and shopping, with monuments, museums and historical sites surrounding the city.

The ancient town of Corinth, located just 84 kilometers west of Athens, is yet another magnificent place to spend a day. A number of important ancient sites can be found in Corinth, such as the Ancient City of Corinth, The Acrocorinthos Hill, the Archaeological Museum and the Iraio Sanctuary in nearby Loutraki, which is also a great place to visit. Once in Corinth, you can invest in a peaceful evening dining at restaurants and traditional Greek tavernas by the sea, or have some drinks in one of the town's many bars and clubs. Visiting the Isthmus, the canal that cuts Greece in half is very popular, and picturesque, and if you're a bit of a gambler, why not visit the Loutraki Casino which is nearby.

Nafplion, one of the most charming and historical towns in the Peloponnese, is located just 148 kilometers from Athens. The town of Nafplion Greece is one of the most popular and tourist destinations in the Peloponnese. Nafplion was the first capital of the Greek State in the early 1830s. The Old Town is lovely, with old mansions and paved paths. The whole town gives a Noeclassical vibe that attracts all visitors. Many historical sites can be visited in the area, while the beach is also close by. Frankish, Venetian and Turkish conquerors left their mark in the town and strongly influenced its culture, architecture and traditions during the centuries. Ancient walls, medieval castles, monuments and statues, Ottoman fountains and Venetian or neoclassical buildings mesmerize the visitor with their unique architecture and beauty. 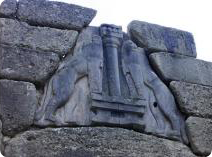 Mycenae is one of the most well know archaeologial sites in Greece. It is found in the Peloponnese area, between Argos and Nafplion. Mycenae is a place where an ancient Mycenaen civilization prospered. This is the kingdom of king Agamemnon, the ruler of the Greeks in the war against Troy.

Due to its proximity to Nafplion and Argos the area has several options for amusement. A day's trip to Mycenae can be combined with a visit to Epidaurus or Corinth or, for the intrepid and well-organized, all three. Mycenae is only 120 kilometers outside of Athens.

The area of Epidaurus has become a major cultural attraction due to its rich history and its vibrant present. Only about 1 and half hours from Athens (125 kilometers), every summer there are different cultural events such as festivals and theatrical performances. The venue for these performances is the Ancient Theater of Epidaurus which is known for its perfect acoustics. Epidaurus is surrounded by lush green landscape and has access to the sea and beautiful sandy beaches.